Kordon ® Breathing Bags™ are a fantastic way of transporting guppies, especially when a flight or extended time is necessary.

The technology was first developed in space/military research and was refined to produce the bags that we have today by Kordon together with plastics & chemical engineers.

The Breathing Bags allow the transfer of gas molecules through the plastic wall of the bag, carbon dioxide and oxygen in particular. As long as there is a breathable atmosphere outside the Breathing Bag, the guppies inside will not run out of oxygen.

Carbon dioxide exits the bags at 4 times the rate oxygen enters the bags, thereby constantly purging the water of toxic carbon dioxide and allowing oxygen to replace it in the water.
Prior to this invention, the only bags available for shipping guppies were made of ordinary polyethylene. When using these "barrier" bags, oxygen must be added as a gas inside the bag prior to sealing and shipment. However, this process has many problems including:
a, high concentrations of oxygen can cause flammable conditions,
b, the presence of oxygen gas inside the bag takes up a lot of valuable shipping space,
c, once the supplied oxygen is used up there is no more available,
d, toxic carbon dioxide from the fishes' breathing builds up in the water, displacing the oxygen
e, the oxygenated air in the bags may not be satisfactory for fishes' breathing, because the bottled oxygen can be contaminated,
f, a bag partially full of water with the rest filled with oxygen allows the contents to slosh during transport, stressing fishes.
After adding water and a guppy to the Breathing Bag, seal the bag with no airspace. I prefer to do this with a knot rather than with an elastic band. Breathing bags can be sealed using all of the current methods: rubber bands, twist ties, metal clips, etc.

Guppies adapt readily to the lack of an airspace and so an airspace is not needed. It is best if there is no air pocket in the bag so that there is no water movement, keeping the fishes calmer with less stress. An unneeded air space also uses up valuable shipping space.

Breathing Bags function well when packed in conventional Polystyrine or cardboard boxes. These boxes have a high rate of breathability, even if these containers are sealed with tape. Air is normally over 21% oxygen, which is over 210,000 ppm (parts per million). Aquatic invertebrates and fishes normally have only about 4-14 ppm oxygen available to them in water.

It takes only a small amount of air passing through the packaging materials to sufficiently oxygenate the water in the Breathing Bags. This is even true for shipping boxes in an air cargo space that is not pressurized. There is sufficient oxygen at higher altitudes for the aquatic life in the Breathing Bags.
Higher temperatures increase the "breathability" of the bags, the rate at which oxygen and carbon dioxide is exchanged.

When packing individual bags in shipping boxes, it is best to separate each bag, such as with flat pieces of corrugated cardboard or layers of newspaper, wrapping paper etc so that as much bag surface area as possible is exposed to the air in the shipping container. These materials are completely porous to air and oxygen.

Breathing Bags should not be shipped inside a "barrier" type plastic liner bag. The barrier effect of the outer non-breathing bag will prevent the Breathing Bags from performing properly.

During tests, fishes, both freshwater and marine, have survived for one month and more in shipment, including on successive flights and land transportation. However this is no excuse for extended periods of containment in the breathable bags and as with every transportation of guppies the journey time should be kept to a minimum.

How to correctly use the Kordon Bags 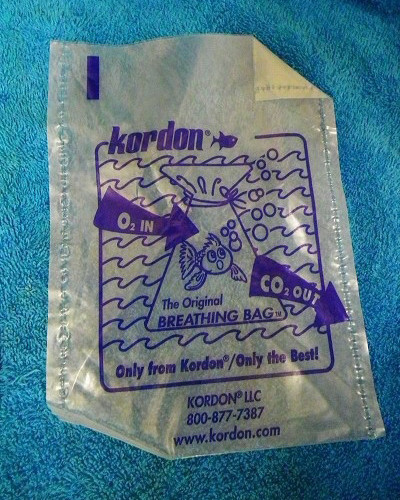 This is the Kordon Breathing bags that I use. It is 125cm wide x 15cm high. 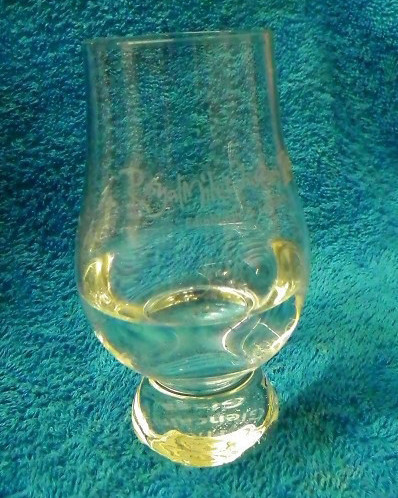 First I use a small glass to measure the amount of tank water I need. Only a small amount of water is needed - about an egg cup full ! 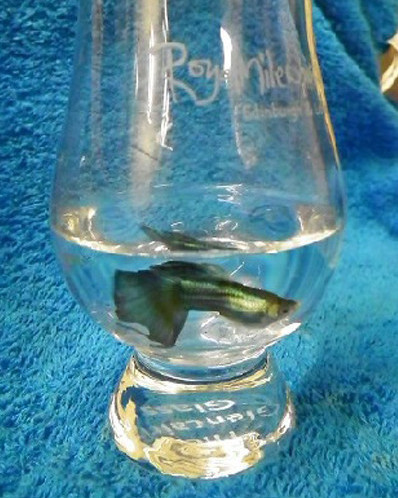 Then I can place the fish into the water. I do not feed the fish for 24 hours or more before shipment. 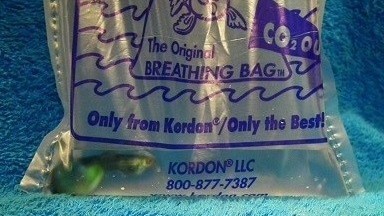 The water and fish is then placed into the breathing bag. Note the water level is about at the printed line. This is about the right amount. I never ship more than one fish per bag. I know that some people do and it is successful but I have also seen many bags where the female guppy kills the mail, the water turns bad and then the female dies too. It is not worth the risk. One bag for one guppy. 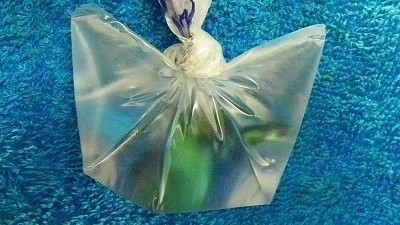 The fish seems to be confined in a small area, but this is good to reduce stress and potential damage to the fish. I have known for another fish to be bagged above the first knot and even three fished in the same bag. The bag is a larger size than I use. I would not recommend the use of the bags in this way. 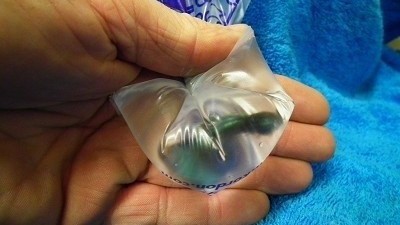 Then I hold the bag between thumb and 1st finger and expel the air until the water rises to the right level (the position of the knot). I then twist the bag which then pressurises the water area into a small balloon and then I tie a tight knot. The rubbery bag stretches as this is done. 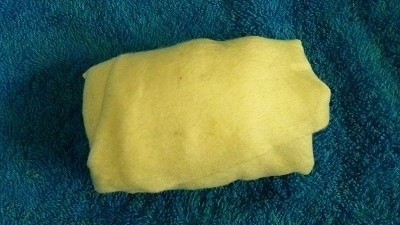 The bag is then wrapped up. A tissue or newspaper is OK for this but I prefer to use a cloth material. Sometimes the bag seems to sweat and the paper or tissue will become wet. The affect is not so bad if thin cloth is used. 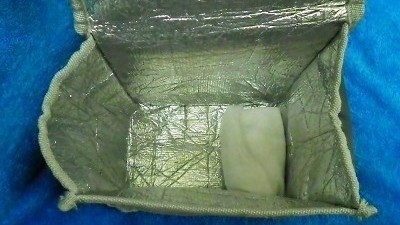 If I am travelling with my fish I use this insulated bag (designed to carry cool beer !) In this I can get up to about 30 guppies It is about 12cm x 17 cm x 20cm 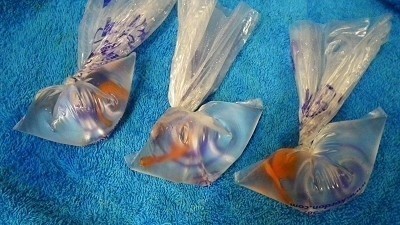 Sometimes I have multiple bags that may need to be kept in sets For example, pairs must be kept together so that the females are not mixed up with the wrong male. I tie these bags together with the strand left above the knot and then wrap them into a cloth so that they do not touch. 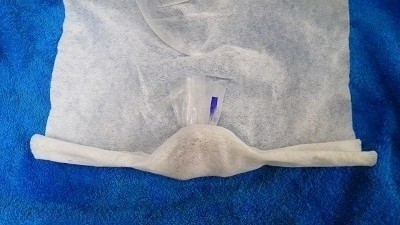 Wrap the fist fish to cover the bag 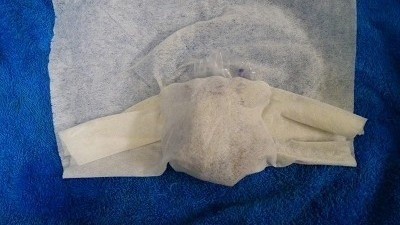 Place the second bag on and fold over again. 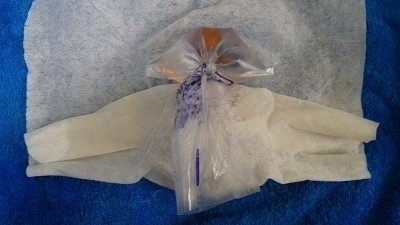 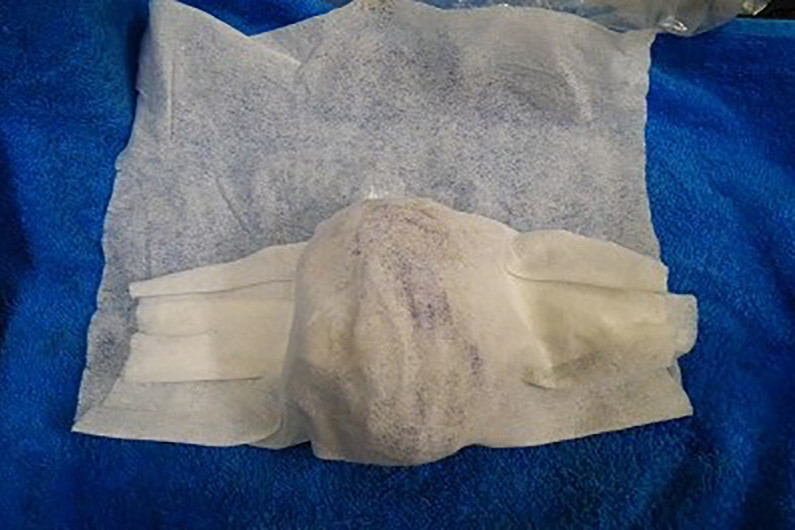 The sides can be folded in 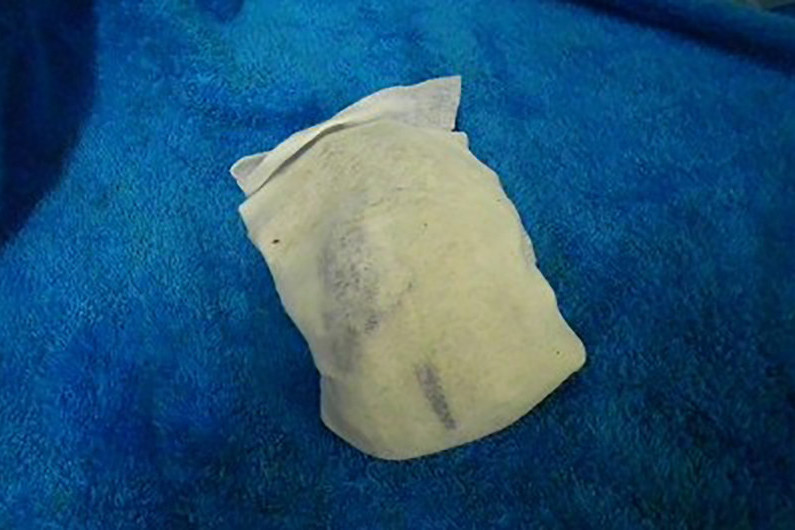 A larger final packet ready to put into the bag

There Are two problems that I have seen with fish sent to me in breathable bags. First of all excessive amounts of water. Half a pint is not necessary, it just adds to the weight and serves no benefit to the fish. The second is that the bag is tied with huge pressure so that the bag is almost fit to burst. When the bags are sent air freight then I very much suspect that the compartment is not fully pressurised. The affect of this would be that the bag would grow in size and thus there it is a possibility that the bag could burst. With this in mind I would also strongly recommend that all fish packages are filled very tightly. Do not fill voids with screwed up newspaper. (This melts into nothing when it becomes wet) It is best to make the box the right size. If that can't be done then the box should be packed with polystyrene. The reasoning is that, apart from the stability of the package contents, if the bags are tightly packed they will not expand or burst.

The bags cost more than traditional polythene bags (approx £0.30 each) to buy but are well worth the investment both in terms of shipping costs and the welfare of the guppies.