I am often asked about snails in aquariums and specifically guppy tanks. I use snails in mine !

If I have a tank of small fry, it can be very easy to overfeed and the uneaten food soon becomes foul and pollutes the water. The same thing happens when I have guppies in a trap, food often floats past and settles on the bottom, and soon pollutes the water.

Some breeders use other fish, such as corydoras, that do not eat the small fry or bristlenose that also have the advantage of controlling the algae. I use snails, and specifically Ramshorn snails.

I have plants in every tank, and as long as I do not over stock with snails I have had no problems. Most of my tanks have Anubias which does not have a soft leaf that would soon be consumed by the snails.

I control the snails by simply removing the surplus. They can be very productive and can soon become overstocked. Simply two or three are sufficient, especially when they grow to 1/2 inch size.

When I had my betta barracks, each compartment soon became encrusted in thick algae that could not be scraped off, least of all because the compartments were too narrow to get a big hand into ! By simply including one or two rams horn snails into each compartment it would only take a week to have all the glass sparkling clean.

I have tried 'Pearl' snails also known as Pond snails and these are often considered as pests. Pond snails are hermaphrodites, and in small numbers, are capable of self fertilization. So if even one pond snail manages to make its way into your aquarium, you will soon be dealing with hundreds - if not thousands of these snails.

I also have a tank with Trumpet snails which are nice, but again are not so efficient. These ones that also devour algae, often burrow into the gravel or sand and as a result aerate the substrate.

The Ramshorn snails grow up to about 1inch in size. Whilst most are a red colour some develop a whitish colour which is due to the calcium deficiency in the water. When the snail dies, the shell turns white and becomes very brittle.

So, in conclusion the Ramshorn snails must be controlled, but are a useful tool in my aquariums. 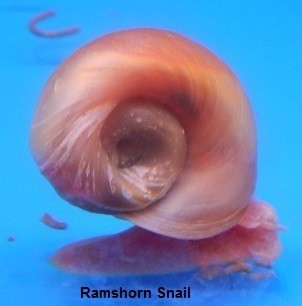