A major problem in most fish rooms is the dampness and mould that forms on walls and ceilings. The easiest and simplest solution to this problem I have seen is to simply paint the walls and ceiling black. Oh if only life was that simple !

So what is the dampness and mould ? The air around us holds a certain level of moisture content. That level increases with higher temperatures, the warmer the air the more moisture it holds. When the air then becomes colder, usually when it comes into contact with a colder surface, then the moisture has to be released usually in the form of tiny water droplets. (yes this is also how rain is formed). This is called condensation. It may be very visible in the worst cases or it may be only a thin film on the surface. 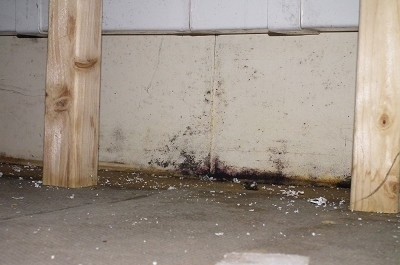 The mould is a fungus that then forms in the water. It is normally black. Usually it will clean off with a damp cloth but of course even if we had the notion to clean it every day or so, it is always in the most impossible places to get to - behind the tanks !

Prevention of condensation is one of the reasons why we need to insulate fish rooms and sheds. By preventing or reducing the cold surfaces the condensation does not occur. There are three ways to prevent the condensation. The first is to increase the temperature. The air can then hold more moisture without the need to release it. The second is ventilation. A well ventilated surface does not allow the water droplets to form and so the fungus can not grow. The third, is to do both !

Sometimes, especially when a room suffers from condensation, the affected areas are decorated with a paint that has a mould inhibitor. This is basically a chemical fungicide that kills the fungus and prevents it forming. This is often not successful and the problem persists, especially over a long period of time. I know several fish rooms that use a de humidifier to reduce the moisture in the air thus eliminating any condensation taking place. A lesser known side effect of this is a good thing. With less moisture in the air it is easier to keep warm and so is more efficient and economical.

We can also reduce the moisture in the air by using glass lids on all the aquariums. However with 140 tanks, I personally would find it rather tedious to have to remove lids several times a day whist feeding the guppies. So I do not use lids to my tanks.

My fish room is very well insulated on the ceilings. There is one part that has not been quite finished and to prove a point, this photo shows the small square that needs to be completed that has suffered from the dreaded condensation and resulting mould. 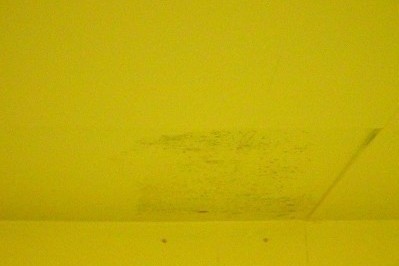 I can report that I have discovered another effective way of preventing the condensation and mould from occurring on the walls. My fish room is heated with traditional radiators. The flow and return pipework have been surface fixed to the perimeter walls at low level between the radiators and no problems have been experienced. 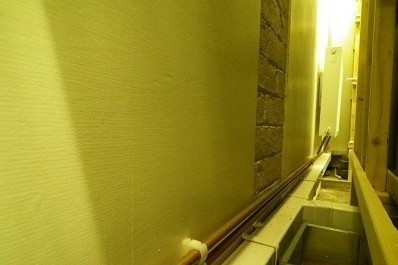 I have reasoned that the heat from the pipes not only warms the walls above (removing the colder surfaces) but also creates a convection flow of air rising up the wall that stops the condensation and prevents the liquid that the mould requires to be present.

There is a section of wall just beyond the last radiator in the run. This has none of the pipework and has a slight showing of mould. I will extend the pipes and see if the mould is eliminated. I will let you know...